At NuVoodoo we’ve been gathering market insights from our own Ratings Prospects Studies each year since we opened our doors in 2011.  We’ve previously fielded our studies late in the year before the holiday season and released results after the holidays in the New Year.  But, things are now moving so fast, especially in Social Media, that we decided we needed a quick mid-year dip to refresh our numbers going into the fall ratings season.

For this sample of nearly 1100 respondents in all PPM markets, we included 14-17’s to have hard numbers to back up what we’re watching happen among our daughters and sons.  For the benefit of our marketing clients, we wanted to separate out which emerging platforms are really on the rise and which are merely hype.  We wanted a fresh look at whether or not the youngest consumers really are pulling away from Facebook.  And, if they are, which platforms are they using instead?

Finally, we wanted to ask a few questions about usage of Pandora and other digital music services.  We know that many Pandora listeners are also heavy users of broadcast radio.  We wanted to know whether those using Pandora pull away from broadcast over time.  What we found is that while those who’ve spent more years with Pandora tend to increase their daily TSL to the service, they tend not to reduce their TSL to broadcast radio. 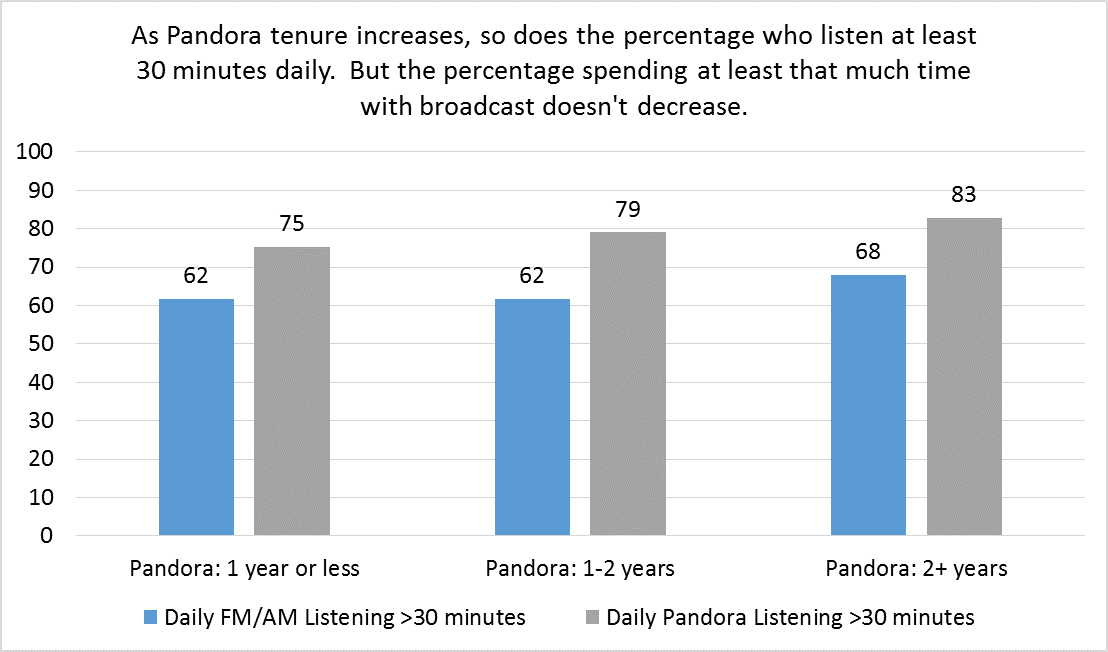 The situation may change as digital services become more available in cars and more connected to home entertainment systems.  But, for now, broadcast radio has the opportunity to fight for TSL with these insurgents.  In some cases there may be more quarter hours to be gained back from these competitors than from other broadcast stations.  All of this happens, of course, only once we acknowledge these services as competitors and vigorously explore how to best compete using the assets we have.  Our research clients benefit from what we’re learning about broadcast radio’s strengths compared to Pandora and her peers.