Another Dark Side of Contests 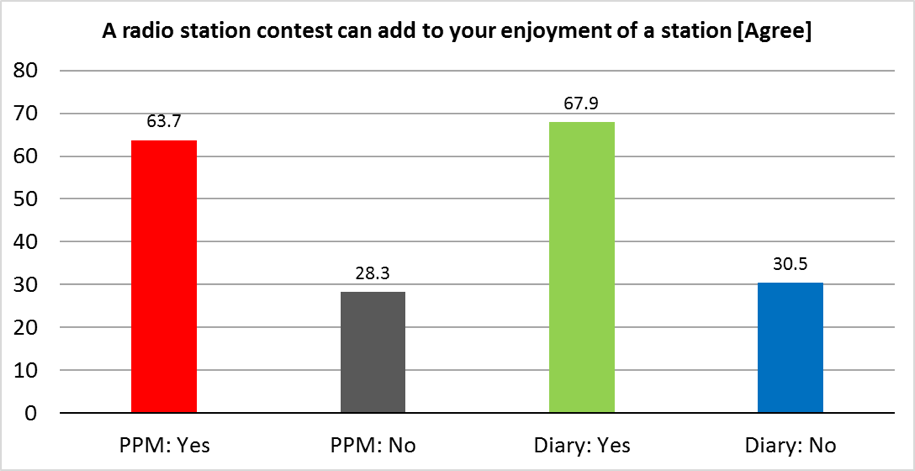 Last week we showed some research numbers about contesting from our eighth NuVoodoo Ratings Prospects Study. The number receiving the most attention was our data showing that 49% of likely PPM respondents believe that most radio station contests are rigged.

Yet, we know that contesting impacts the listeners we care about the most – those likely to be within the ratings pool. From the perspective of adding to their enjoyment alone, we see more than twice as many among the ratings-likely populations respond positively to the idea of contesting. Investigations from past studies suggest that the pool of likely contest players tilts even more decisively toward likely ratings responders.

In other words, contests appeal largely to the type of people stations hope to influence with these tactics. Of course, just because contest players over-represent among likely ratings responders doesn’t mean that every contest player is carrying a meter or a diary. But, influencing contest players absolutely tilts the table in your favor.

But, in addition to the headwind we exposed last week – that many feel radio’s contests are rigged – there’s another dark side for contesting. Better than 2 in 5 among ratings-susceptible respondents for either methodology also believe that stations spend too much time talking about their contests and events. Those numbers vary by format and demo and, of course, by specific station. But, if you’re relying on contesting to help enhance numbers in critical ratings periods, it’s wise to audit the non-music content on the station to hear what’s going on from a listener’s perspective.

As stations become more reliant on events as tools for both promotion and sales, it’s easy for there to be no “jock inventory” left to relate to listeners about other things. If breaks that talk about things other than giveaways and events are the exception, it can become hard to get the message across about a new contest or event being special.

An audit we conducted of major market CHR’s just a few months ago showed that it was rare that stations took time to mention even the songs and artists they were playing – the lifeblood reason most listeners tune in. Many consultants advise PD’s take time at least once a month to get off site and listen like listeners. Such exercises are even more fruitful when PD’s can forget the rules for an hour or two and hear the stations the way a first-time listener might – one who doesn’t know the jocks or the contests or upcoming events.