Do DJ’s on Radio Stations Say Anything Interesting?

The Twelfth NuVoodoo Ratings Prospects Study, fielded back in June with over 3,000 respondents across all PPM markets shows that a minority of respondents agree with the statement, “DJ’s on radio stations never say anything that’s useful or interesting.” Most respondents disagree with that statement. In all, one third of our sample of persons 14-54 agreed with the statement. Among the groups of the sample we’ve identified as PPM-likely or Diary-likely (“PPM: Yes” and “Diary: Yes” in the chart below) – who tend to be better-than-average radio listeners – the number rises to two-fifths. But, it’s still a minority, right? 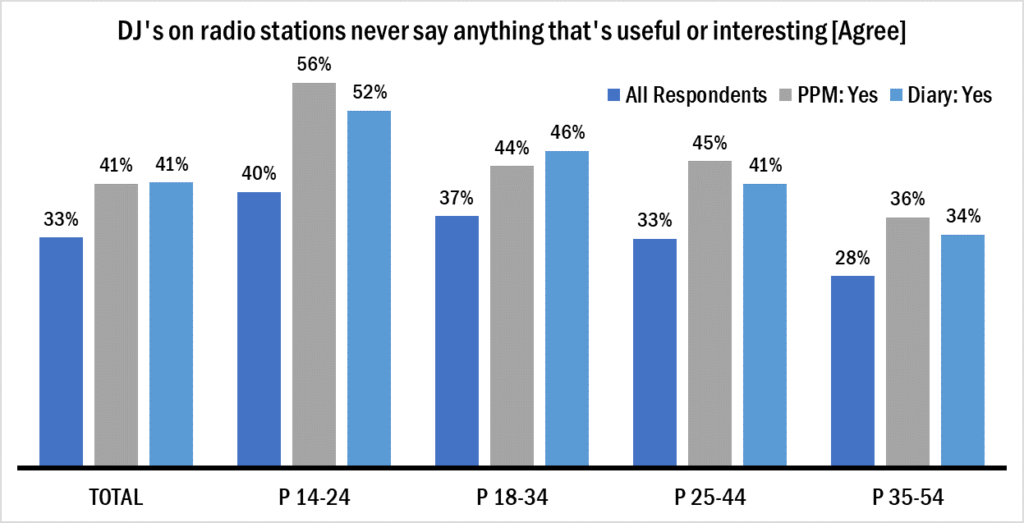 The numbers are a little healthier among 35-54’s – also better-than-average radio listeners – and a bit worse among younger demos (and a slight majority among ratings-likely 14-24’s). Since Madison Avenue isn’t budging on its belief that 25-54’s are the most-important consumers, it may be of concern that those entering the 25-54 demo today are less forgiving about radio than those who are aging into 55+.

We also noted elevated agreement with the statement about DJ’s not saying anything useful or interesting among those listening less to FM compared to a year ago – and even higher numbers among those who say they’re listening more to Pandora or Spotify compared to a year ago. Of course, these are just correlations, you can’t necessarily conclude there’s any causation here.

There are bigger problems for FM than uninteresting DJ’s. But, DJ’s remain in the control of many PD’s. So, maybe it’s worth giving your station(s) another listen? Imagine you’re a regular listener, one who doesn’t know which liner should be playing in this position and doesn’t care if the sponsor’s slogan was included in the contest promotion. You just tuned in hoping to hear a few songs you really like while you’re heading out to the mall or getting some work done.

Spend a half hour listening at a few random times (off site, if possible) to see if you hear anything that would be interesting to a listener – which is to say, beyond his or her ability to give the correct responses about your station in a perceptual interview. To you, it may be important for a listener to know that your station plays the best variety of music from a span of several decades or that your station is top-ranked for the latest hits, but chances are that none of that’s interesting to him or her.

What’s interesting? Loads of things from service info (weather & traffic related), to community events, to entertainment info, to something unusual about a song or artist that played, to changes impacting people around your area (construction, weather, events, etc.) and on and on. Dale Carnegie taught us that people love hearing their own name – and our data has shown that shout-outs still have impact. Done well (which includes not getting in the way of playing music) these things have the power to make listeners feel good, to make your station memorable and to positively differentiate radio from Pandora and Spotify.