NuVoodoo marketing guru PJ Kling and I put the wraps on a series of free webinars entitled “The Wearable Wolf is Coming” a week or so ago. The webinars mined insights from a sample of nearly 5,500 14-54’s across all PPM markets. If you missed the webinar, you’ll find a recording at nuvoodoo.com/webinars.

In the closing minutes of what turned out to be a 45-minute session, we showed data concerning the things listeners say have caused them to tune out or change stations most frequently. Tied at the top of the ranking are: 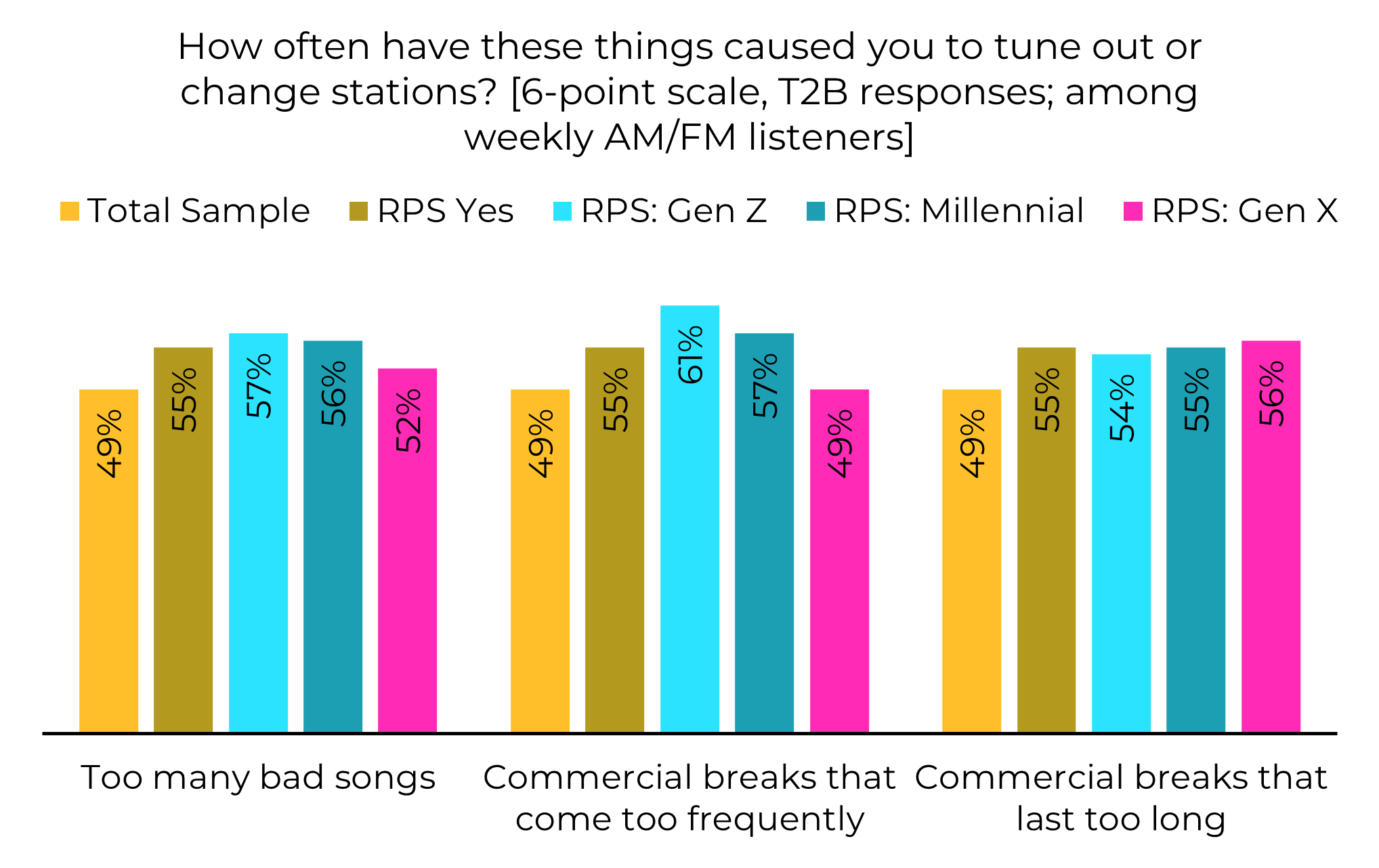 Most programmers have no control over commercial inventory overall and only modest control over how breaks are laid into the clock. But they do have control over the music that’s played. Following Teddy Roosevelt’s famous advice, “Do that you can, with what you have, where you are,” making sure the music is right is imperative.

Library music tests are a quick solution in most cases – getting results back on up to 600 songs all at one time, usually within a month or so. The concern for several generations of programmers has been respondent fatigue across 600 music hooks. Digital technology has vastly improved things since the days of in-person AMT’s with rows of respondents in a hotel meeting room penciling in little bubbles on a Scantron sheet – while listening to not only the entire hook for every song (even the ones they hate), but also hearing the monotonous drone of the announcement of each hook number.

Online interviewing allows us to get much closer to the ideal world where respondents are making music test judgments much as they would listening to music in the car: the impulse to ease the volume up during a favorite song or switch stations when a bad one plays.

But 600 hooks is still a lot of hooks and NuVoodoo is as concerned as any programmer is about fatigue. It’s widely known that attention spans have suffered in our multi-screen-always-connected world. To combat this, our founder and president Carolyn Gilbert – who’s been working on and worrying about music testing for decades came up with an elegant solution: The EXT online music test.

The EXT takes advantage of abundant online sample. Samples are screened perfectly and rigorously checked for quality – as they always are at NuVoodoo. We over-recruit by a factor of two or more for a 600-title test. Each respondent rates HALF the music hooks but answers ALL the perceptual questions in the test. Technology allows us to match up sample monads so that every song is rated by a perfect representation of the contracted sample (usually 100 respondents balanced by target demographic, ethnicity, station cume and preference). Clients get the benefit of a more attentive sample AND double the sample size on perceptual questions.

Since shorter interviews are less expensive to conduct, pricing for the EXT is the same as it was for the longer-interview OMT. Carolyn talks about the EXT concept with me and Mike O’Connor on a video also available at nuvoodoo.com/webinars – scroll down to find “In 2022, Can You Rely on a Single Respondent Rating All 600 Online Music Test Hooks?”

Length and frequency of commercials breaks – we can’t help you control those. But we can help avoid bad songs.