We’ve shown previously that most likely ratings participants respond positively to radio station contests.  So, contesting remains an important component in any programming and marketing team’s toolset.  The challenge is building a contest that will influence listener behavior (and, more to the point, ratings-participant behavior) while not spending any more than necessary.

In our most recent NuVoodoo Ratings Prospects Study we faced off the concepts of a contest that gave away one thousand dollars once a day versus another that gave away one hundred dollars ten times a day.  The results – especially among 18-34’s – may surprise you.  In fact, even among 35-54’s the results show similarly-sized groups backing the concepts of the bigger payout once a day versus smaller prizes more often.

While $1,000 might not be a life-changing windfall to some 35-54’s, it surely would be for many 18-34’s.  But, how many of us would turn up our noses at an extra $100 – especially if it was easy to enter and play and we perceived that our chance of winning was elevated because it seemed to happen frequently? 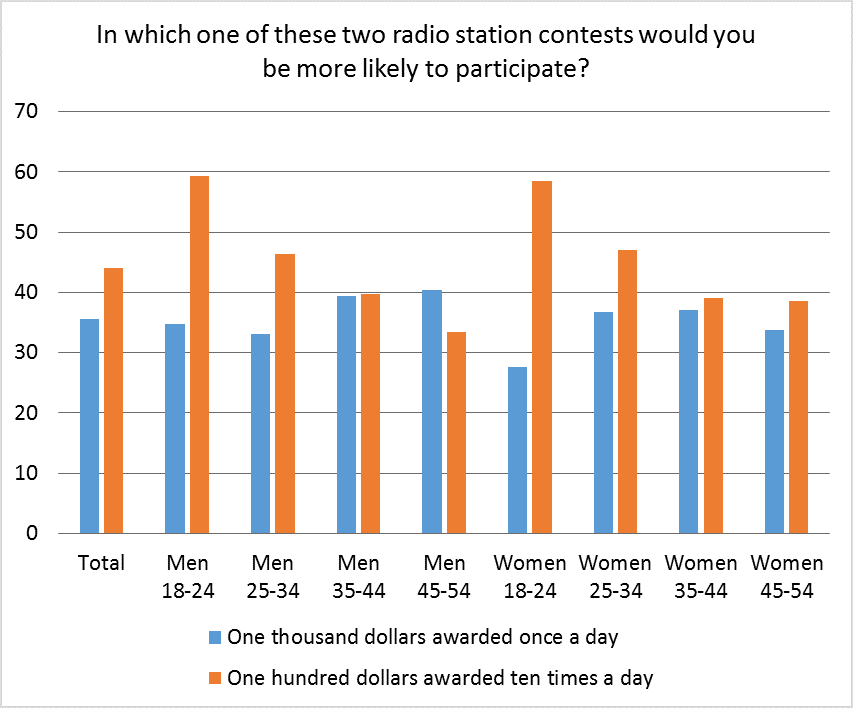 Even in 2016, $100 is a nice prize – in a vacuum.  Of course, that $100 sounds paltry if a direct competitor ups the ante to $500 or $1,000.  But, our point here is that there’s drawing power in spreading the contest prize amounts more thinly – as long as it’s coupled with higher frequency (and the resulting perception of a greater chance of winning).

Behavioral economics suggests that the best design for a contest combines easily-won smaller prizes with the longer-term lure of a big payout down the road – appealing to both our desire for immediate gratification and the greater imagination value of a truly life-changing prize.  Group collective contests and single-station insured prizes can achieve this structure if promoted and executed correctly.

In radio we’re accustomed to spending copious amounts of time and money to get a station’s music dialed in just right.  Contests and the prizes being given away deserve as much time and consideration to maximize influence while minimizing expenditure.