Fishing Where the Fish Are

When we asked consumers in our NuVoodoo 2016 Ratings Prospects Study how much time they spend with FM or AM radio and Pandora, stack up those who listen at least an hour a day – and then sift the results by household income (abbreviated “HHI” here), the results are sobering.  Among the highest earners in our study, Pandora is at parity with terrestrial for heavy listening.  While actual time spent listening may not have hit the levels reported here, the trajectory is clear. 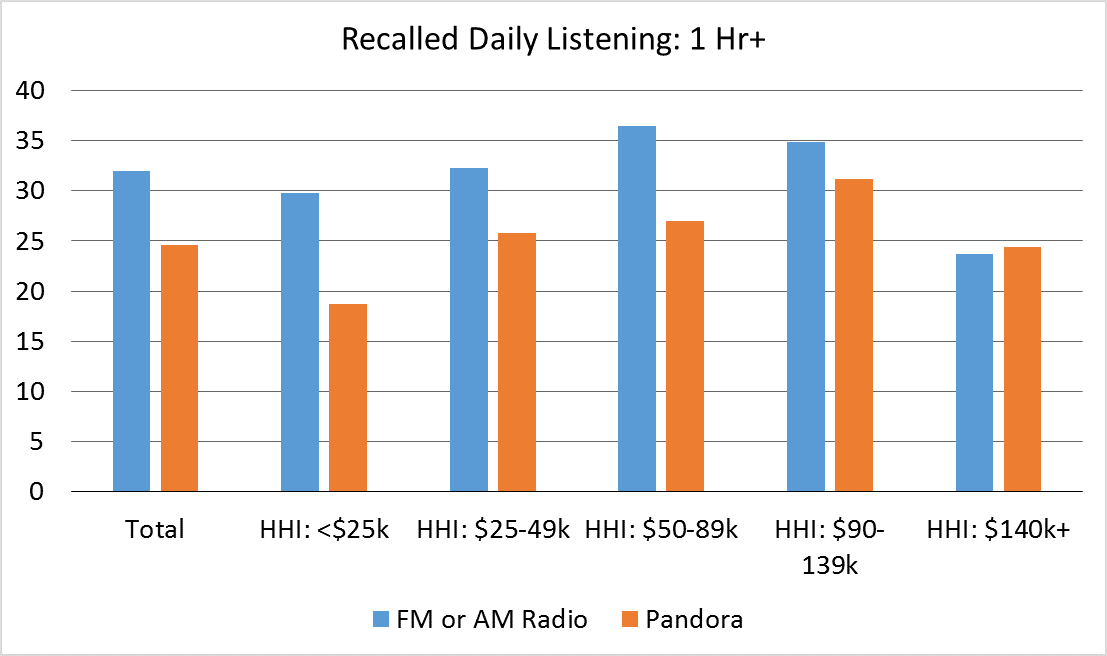 We’ve shown previously that household income skews predictions of participating in either ratings methodology – especially PPM.  The regular stipend and other participation incentives are a greater inducement for those with less money coming into their homes.

As we asked respondents to rate the job terrestrial does compared to other media choices, we see that terrestrial’s best ratings come from the lower end of the economic spectrum.  Regardless of whether it’s delivering the biggest current hits, library depth, new music discover, or targeted music, terrestrial is about twice as durable among lower earning households.  When you add in their greater likelihood of showing up as ratings respondents, the power of targeting these consumers becomes clear.

Does this mean that programmers should intentionally exclude upper earners from their targeting?  Of course not; every quarter hour is valuable.  However, it is apparent that household income will increasingly need to be part of targeting for radio stations, both in terms of marketing and programming.  Those with less disposable income will be less likely to pay for new services, less likely to use up limited wireless data and less likely to purchase new devices to align with the newest media.  Additionally, moderate-sized contest prizes have always sounded more enticing to those with less disposable income (as has been observed by anyone watching the people who come in to claim contest prizes at radio stations).

Hunters hunt where the prey is plentiful.  Fisherman fish where the fish are.  Radio must program to the ears that are most available now – and those who are most likely to patronize radio as options continue to multiply.

Next week we’ll review the entertainment bundle that radio provides and look at which parts of the bundle are most valuable to consumers today.