If the ideal way to select and schedule music for the plurality of heavy music radio listeners is requests and submissions, why don’t more stations portray that in their presentation and imaging?  Of course, ideals vary from format to format.  In current-based formats preference for adherence to charts gets stronger and in gold-oriented formats preference for DJ’s to use their judgment gets stronger.  But, through it all music radio imaging remains mostly silent on the matter.

The chart shows the music selection preferences of heavy music radio users 18-54.  How they perceive radio music is being selected is another matter, with higher-than-ideal percentages believing the labels pay for airplay or the playlists are uploaded from a corporate office.  And again, music radio remains mostly silent on the matter. 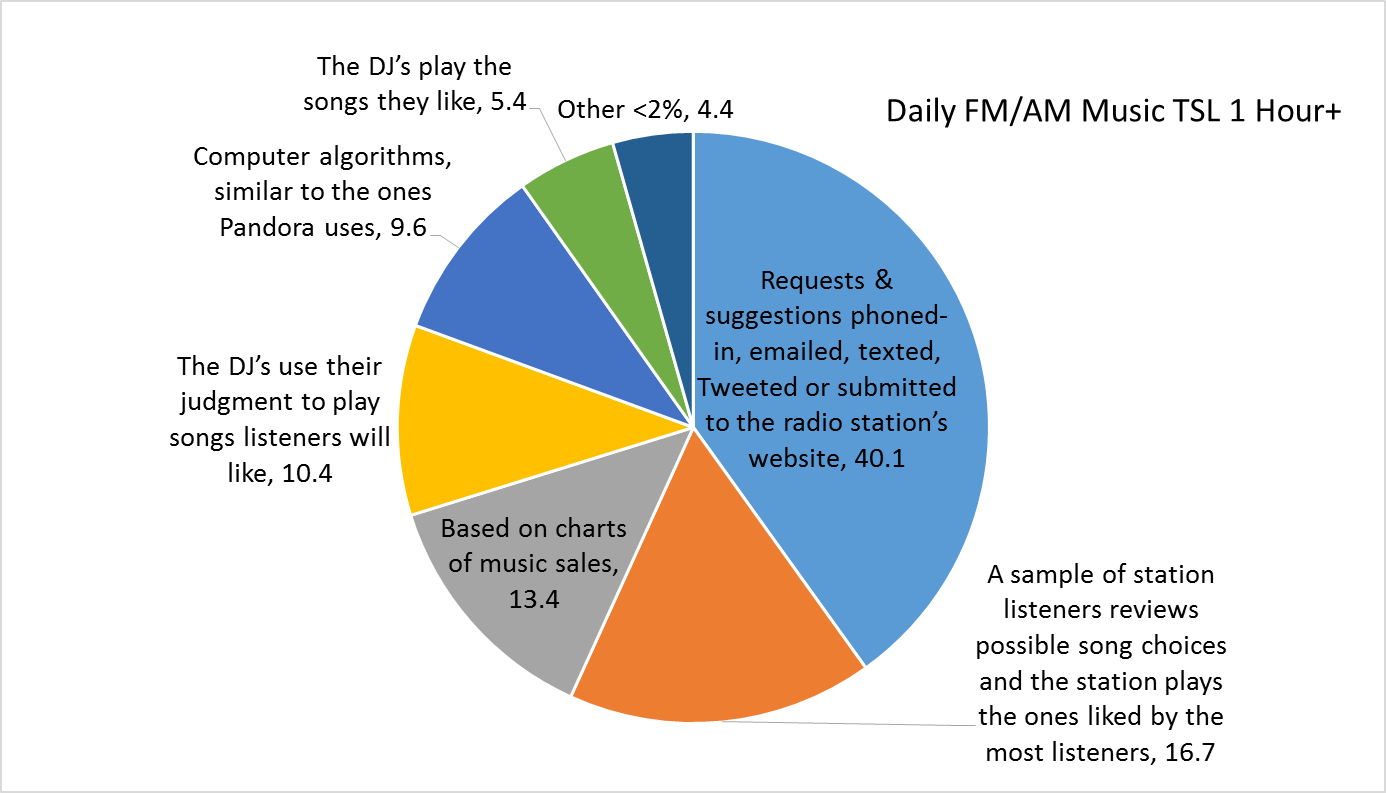 Even without online interactive schemes like Listener Driven Radio or Jelli or CrowdSourcing, stations can involve and engage listeners in shaping their playlists.  While it involves effort, they effort pays off in increasing the perception that the station really IS interested in the feedback of its listeners and aids in differentiating the station from its competition.

We used verbiage in our study to represent the music testing that many radio stations employ – and got a surprisingly strong endorsement for that path: a sample of station listeners reviews possible song choices and the station plays the ones liked by the most listeners.  While we believe that tools like Rate the Music aren’t substitutes for properly-screened, passively-recruited music research, they are great promotional tools.  They allow a station to have a public face for the actual research it conducts – while widening its database and deepening its connection with listeners.

Music charts remain relevant to listeners, especially in current-driven formats.  Years ago, every Top 40 station published its own chart.  While the practice has largely ceased, there’s evidence to suggest that it would be useful even today.  After all, it would give listeners a way to engage with the station, feel that they have influence on the music choices being made and, thus, increase their stake in their preference for the station.

In many gold-based formats, the idea of DJ’s choosing the music remains a preference.  While most stations shelved that practice decades ago, it remains a desirable image for many listeners.  And, why wouldn’t a station seek to support that belief among listeners?  Shouldn’t the DJ’s be the most enthusiastic fans of the songs they play?  It involves a bit of acting on the part of the DJ, but the result is worth the effort.

All of these efforts are theater of the mind, where a station can paint a picture in the listener’s mind of almost anything that listener is willing to believe.  Research can be used to learn which ideas are desirable and credible from a given station – and which are not.  Then it’s up to the creativity and skills of the programming team to paint pictures to influence listener perceptions.  And what’s cooler than that?