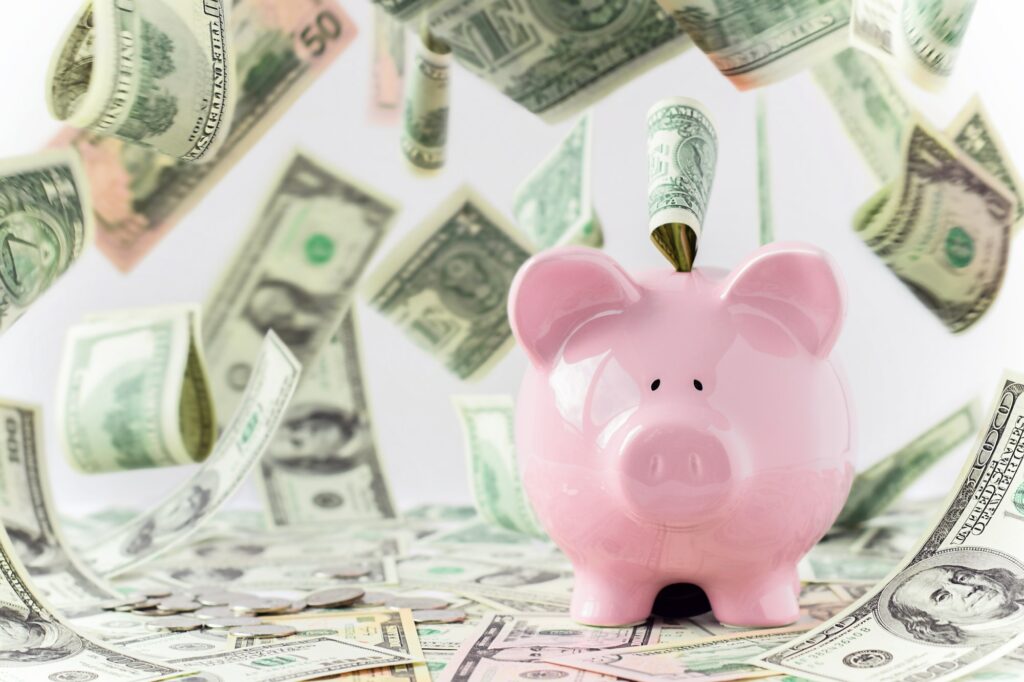 Nielsen says it’s turning over as many as 75% of the legacy PPM meters by year’s end and replacing them with their new wearable meters. So, NuVoodoo upped the sample on its summer RPS (Ratings Prospects Study) from our typical sample of over 3,000 respondents to a massive sample of nearly fifty-five hundred. We did this to ensure we’d have enough respondents to break out subgroups of likely ratings respondents who predict they’d carry the new wearable meter in each of its three forms: clip mount, pendant, and wristband. Based on our data Nielsen is going to need a lot of wristbands. 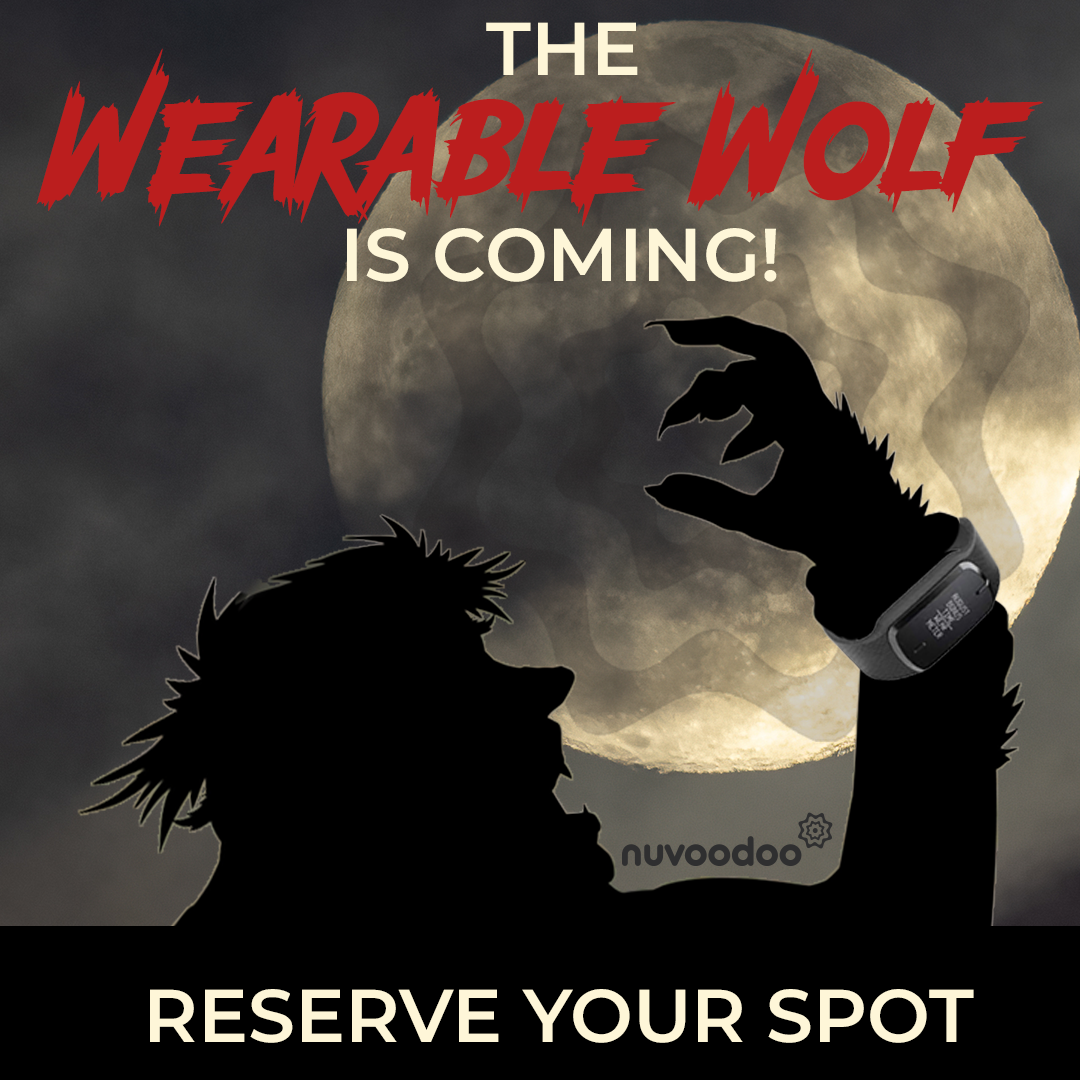 The first of three live sessions of our presentation is set for Tuesday, July 19 at 1 PM EDT – with additional sessions scheduled for Monday, July 25, and Wednesday, August 3. The live sessions are great since they allow us to answer every question that arises from attendees. Get your spot now at nuvoodoo.com/webinars.

Making plans now for maximizing promotional effectiveness in the fall ratings periods, the simple matter of how much cash is enough to “move the meter” is important. Comparing what we’d seen at the start of this year, contest cash thresholds are unchanged across the total sample. 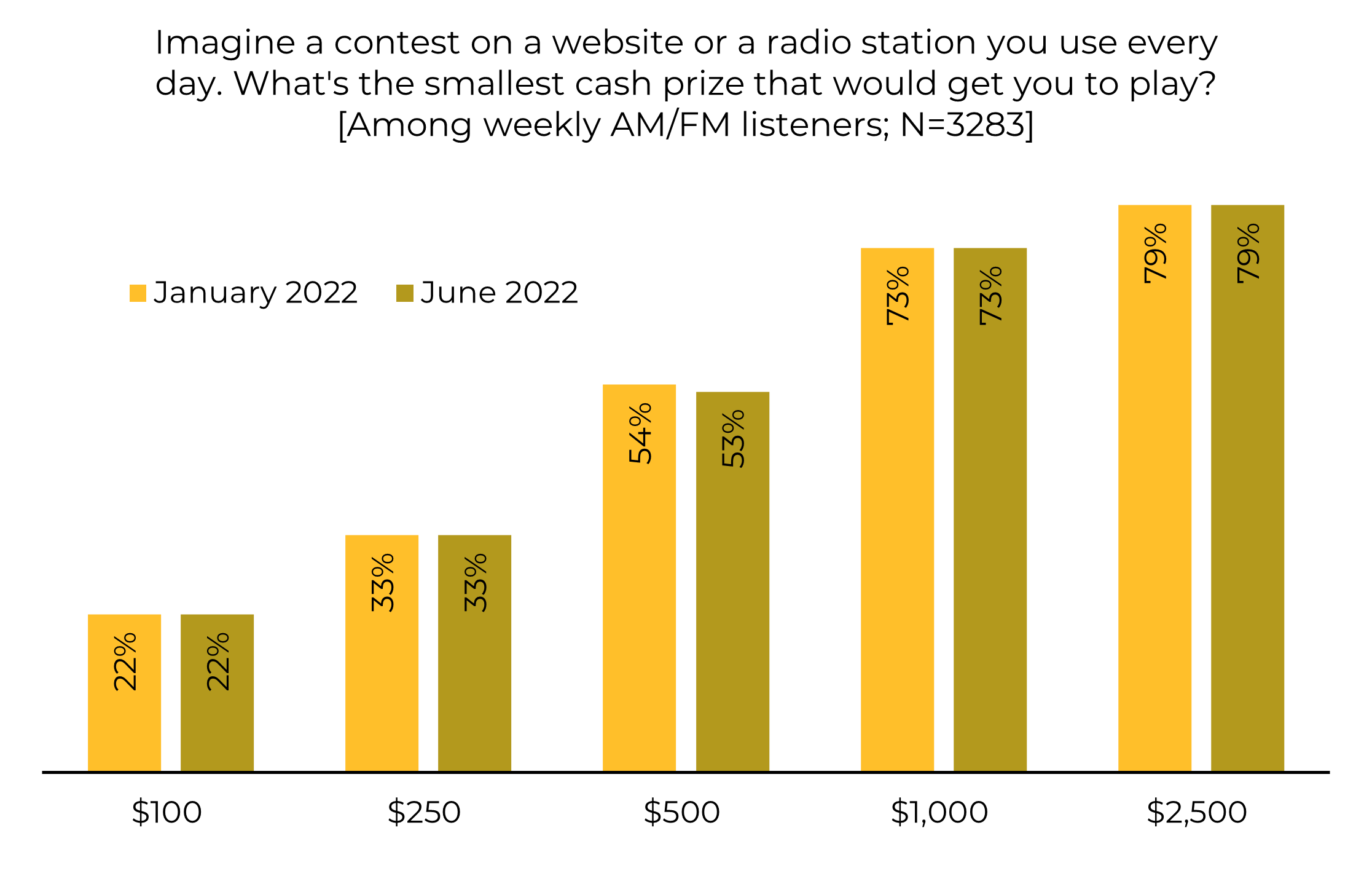 Just a few years ago the delta between $500 and $1000 was less than 10 points, but as shown above, there’s currently a gap of twenty points between those two prize thresholds. Most of us would be just fine with an extra $500 in our pockets, but in the competitive world of radio contest play you have to appeal to those who are most-inclined to participate – which starts with those likely to participate in the ratings.

If we drill down to the subset of our sample who predict they’d fully comply with Nielsen if offered into its sample, we see the percentages creeping up for all levels of prizing tested – a telltale sign of stress on household budgets of those likely to participate in the ratings. And we see a nearly 20-point gap between those who say they’ll play for $500 compared to those who would play for $1000. 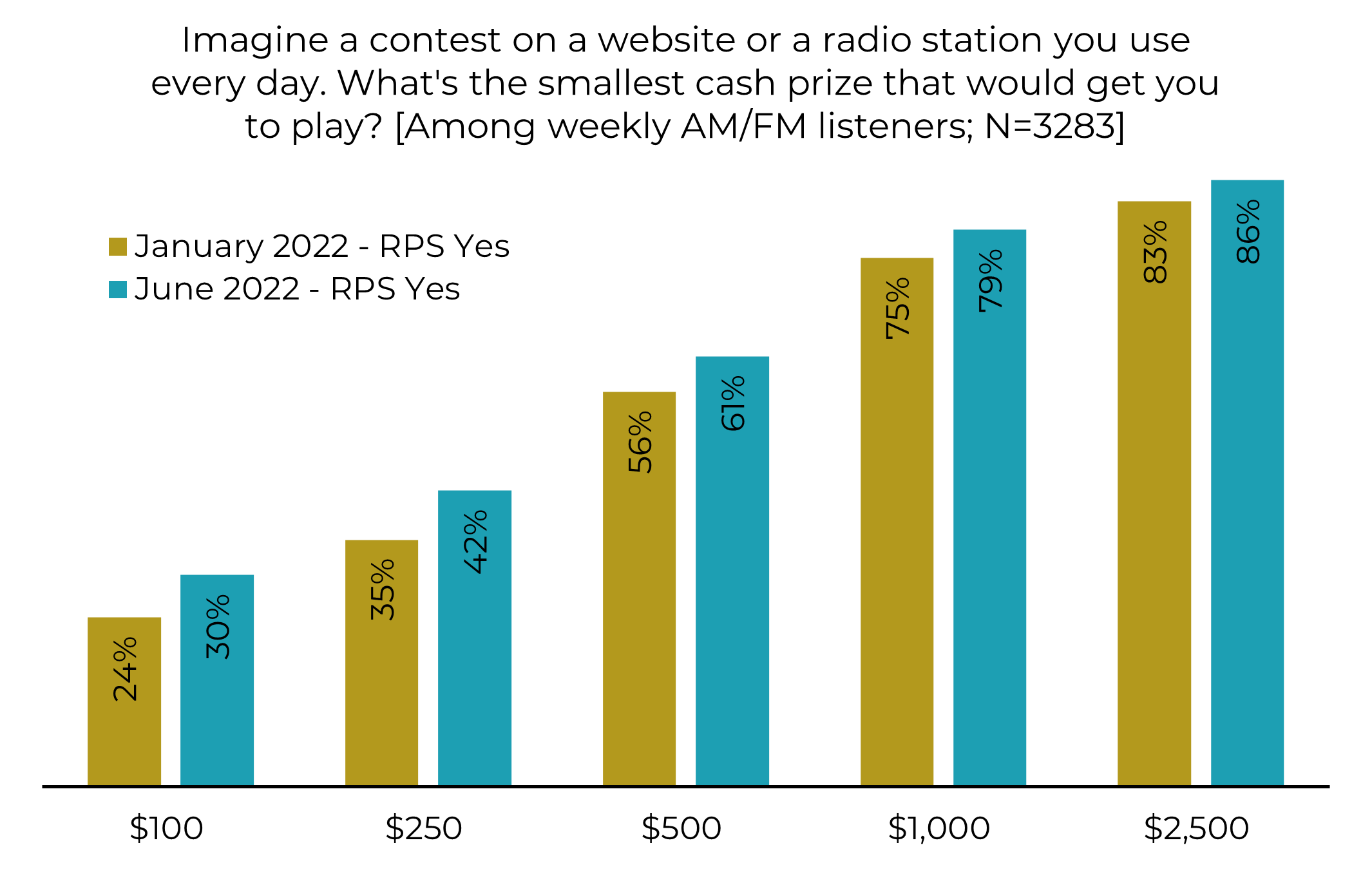 Of course, you’re not running promotions in a vacuum – you’re competing with the prizes offered by other stations. Knowing that more than half the ratings likelies will take notice of your $500 prize seems like it might be good enough … until you realize the $1000 on your competition sounds even better … and, as we’ve shown in the past, those prize-hungry participants DO take notice of which station has the biggest prize.

We showed last week that nearly 60% of ratings-likely respondents predict they’d opt for the new wristband wearable – with those remaining split between the “clip mount” (sort of a mini-pager) and the new pendant. Our new study has sufficient respondents to compare groups of ratings likelies who say they’d choose each of the new wearable meter form factors. We’re sad to report that those who say they’d take the clip mount mini-pager also say they have a higher price point for contests: you’ll have to pony up well over $1000 to get the attention of 80% of the clip-mount crowd. 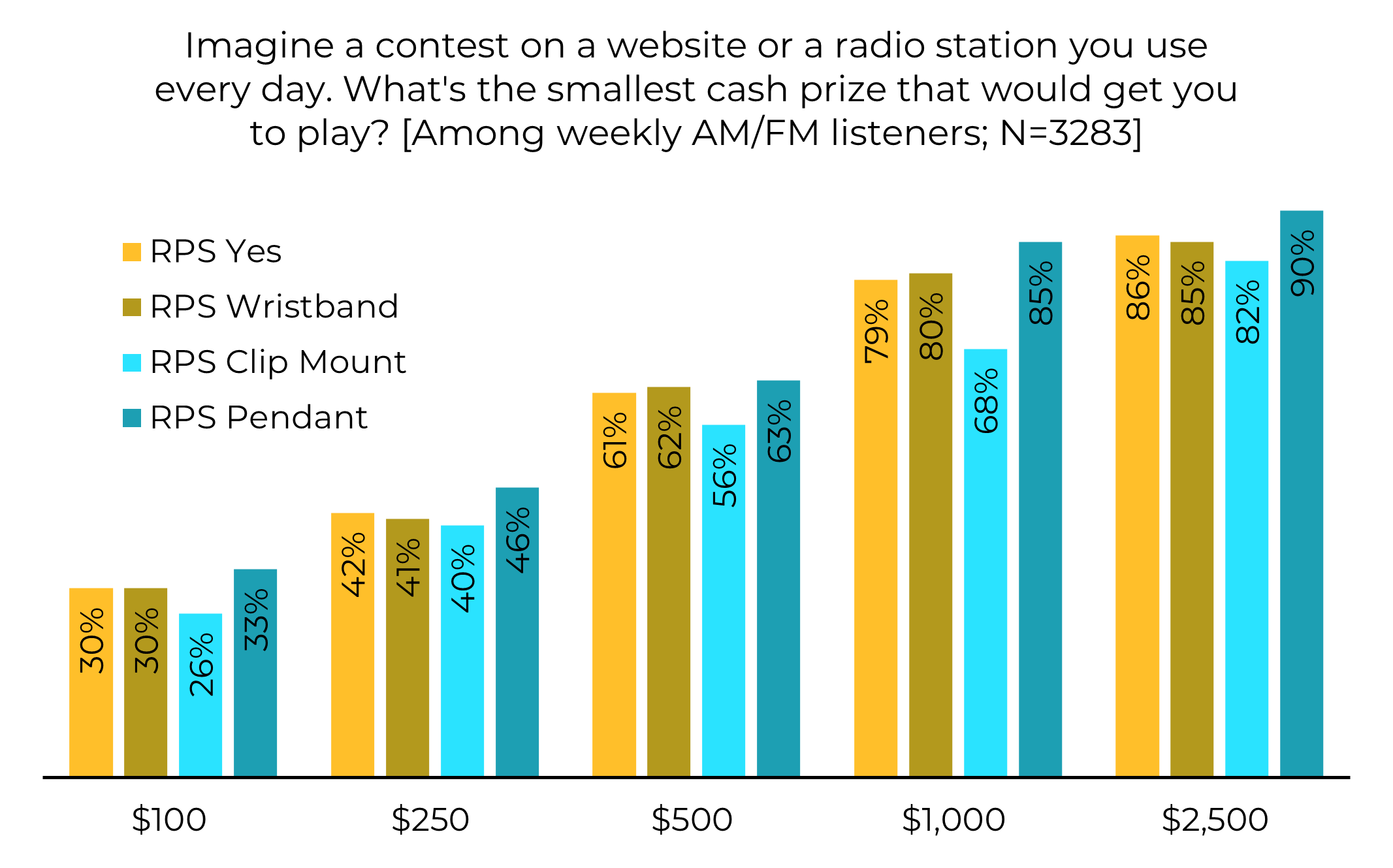 We’ll get into the nitty gritty of which demos and format constituencies have the biggest clip-mount squads – as well as who’ll wear pendants or wristbands – and what lures them in (and what they say makes them tune out). We know July is one of the peak months for summer vacations, so we have three live sessions starting Tuesday, July 19 at 1 PM EDT (with additional sessions scheduled for Monday, July 25, and Wednesday, August 3). Save your spot now at nuvoodoo.com/webinars.