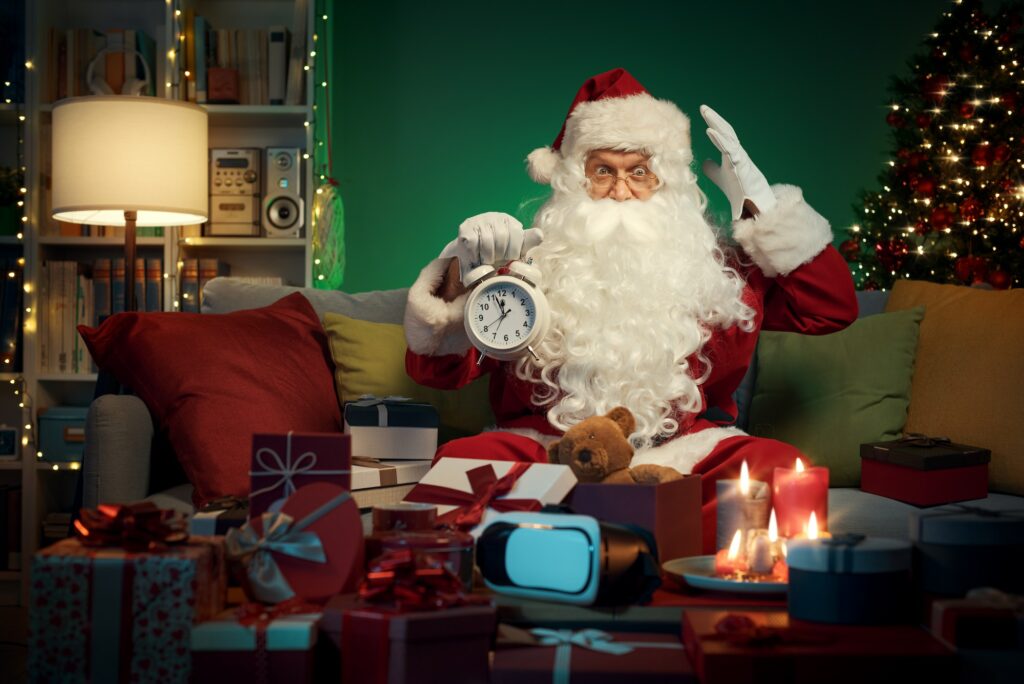 Curiosity got the best of us as Halloween faded and Thanksgiving loomed for the first relatively “normal” holiday season since 2019.  How are people feeling about the holidays this year?  Who’s more excited?  Who is less excited?  Are we Scroogier or Tiny Timmier?  Have our shopping habits changed for good?  With inflation and the threat of a recession looming over us, how do we feel about spending in 2022?

Inquiring minds went to a NuVoodoo Quick Turn Study to get the answers.  We asked 1,889 Americans aged 18-65 from all 50 states how they were feeling about the approaching holiday season during the first week of November.  Sample was collected using geographic quotas and weighted to reflect the demographic distribution cited in the 2020 United States Census.

As we emerge from our caves following a long pandemic siege, and as an exhausting and divisive election season finally comes to an end – at least for the time being – what are our emotions about the season of giving, peace on earth and good will toward all?  The answers are telling.

I live in Ohio – where we’ve been meeting in person and masks haven’t been ubiquitous (and are currently almost nonexistent) since about the time of the third COVID vaccine, last winter.  I visited New York City last week, and the scene was a little different.  People were discussing the planning of their first in-person events in 3 years.  Saw many masks – even outdoors.  Clearly, the pandemic is not nearly as far in the rearview mirror there as it is here in the fly-overs.  And we suspect that because coastal urban areas were hit so very hard, especially at the onset of the pandemic, this cautious attitude is well-earned.

This would seem to be borne out in our data.  While everyone seems to be a little more excited about 2022 than they were last year at this time (about which they were euphoric as compared to 2020!), we found that the city mice in our sample are far more excited than the suburban/country mice! 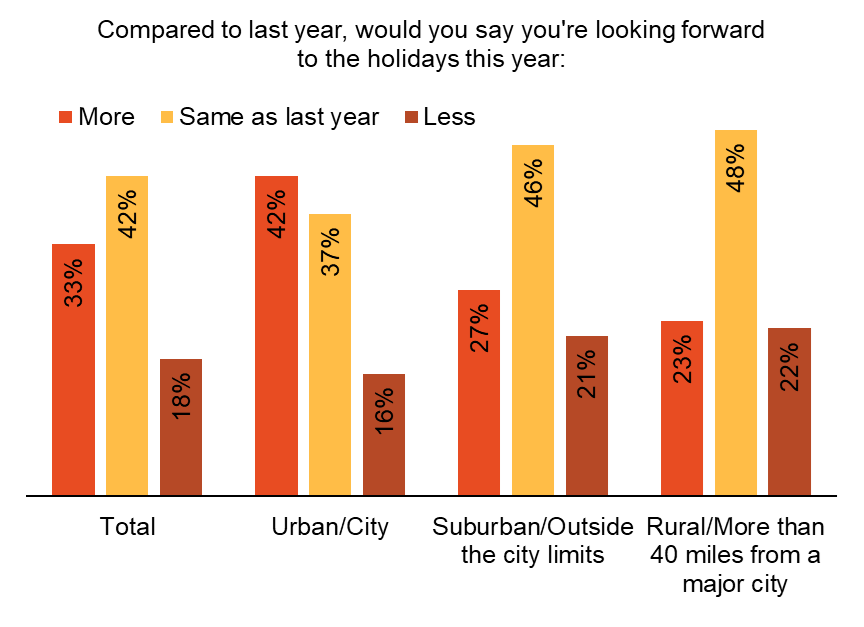 Who’s the most excited?  Interestingly, men seem to be looking forward more than women.  And predictably, those folks with children in the house under 18 years old are the most excited.

“It’s the economy, stupid,” was the unspoken mantra during the recent elections.  And clearly, everyone has noticed how much more everything costs these days.  What would that mean for holiday spending?  How do people predict they’ll be gifting in 2022 vs. 2021? 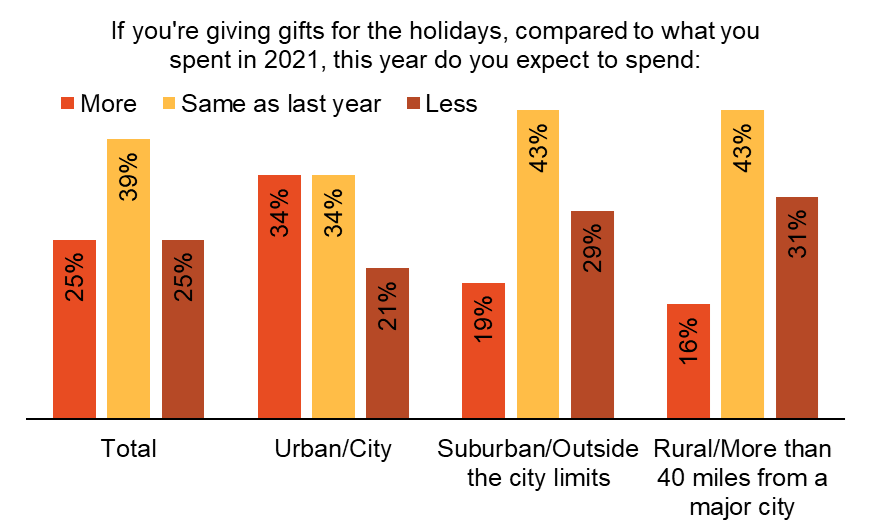 And what about those with kids vs. those without?  Clearly, inflation be damned, parents would seem to expect to spend more to make sure it’s a holly jolly Christmas for their children. 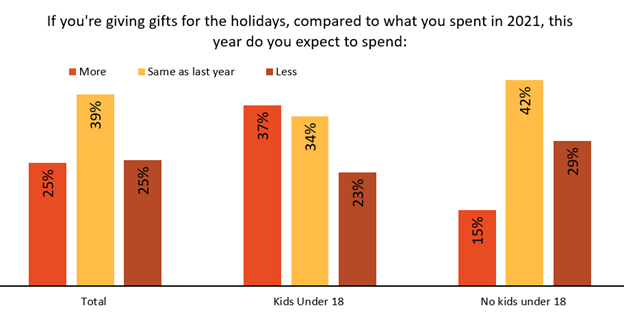 Since so many were now experienced on-line shoppers, we wanted to know whether that move was permanent – would they brave the stores during the holiday season this year? 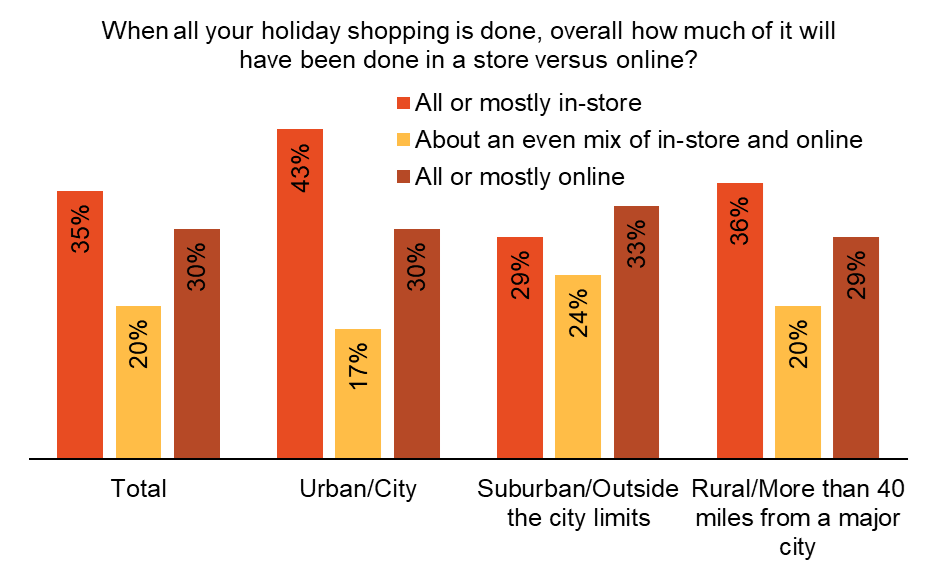 Thinking about where we were two years ago – and where we are now – it’s no wonder that the move back to “normal” has been slow.  But these data indicate that we seem to want to get past the PTSD phase of the uncertainty of the past few years and move forward with some brand of optimism.  We long to shut out the noise, be with family, enjoy the break that the holidays can offer and carry on.  Let’s hope that 2023 can bring us full-circle back to perhaps a little more stability than we have seen during the past few years.  And that we remember what’s truly important in our lives.

Like the study data shown here, NuVoodoo QuickTurn Studies are completed with carefully controlled national samples. We can turn them around in less than 48 hours. If you believe, as we do, that decisions made with the benefit of data are better decisions, QuickTurn studies add a new weapon to your arsenal at an attractive price.