The Battle of the Sexes Among Radio’s Exes, Part III

Part of the NuVoodoo talk, “The Battle of the Sexes Among Radio’s Exes,” at the Worldwide Radio Summit in Hollywood a few weeks ago dealt with podcasting. Leaning on data from two proprietary studies, our latest Ratings Prospects Study, comprising nearly 5,700 respondents, and our Nationwide Podcast Study, comprising nearly 3,000 respondents, we showed that podcasts are getting traction.

In our PPM market sample of 5,686 respondents, ages 14-54, 10% report using podcasts an hour a day or more. The number jumps to 14% among Men 35-44 and 22% among Men 25-34. Starting from that perch, those numbers will only rise as podcast listening becomes easier to do in cars and in other phases of people’s lives.

Of course, lots of podcast listening occurs at times and in places where broadcast radio hasn’t had a strong foothold for a while. People are scratching different itches than they might be scratching while they’re driving or working. The possibilities for your programming team are limitless right now. After all, even if they’re not listening to your broadcast signal, it would be better if they were listening to your programming than someone else’s programming. 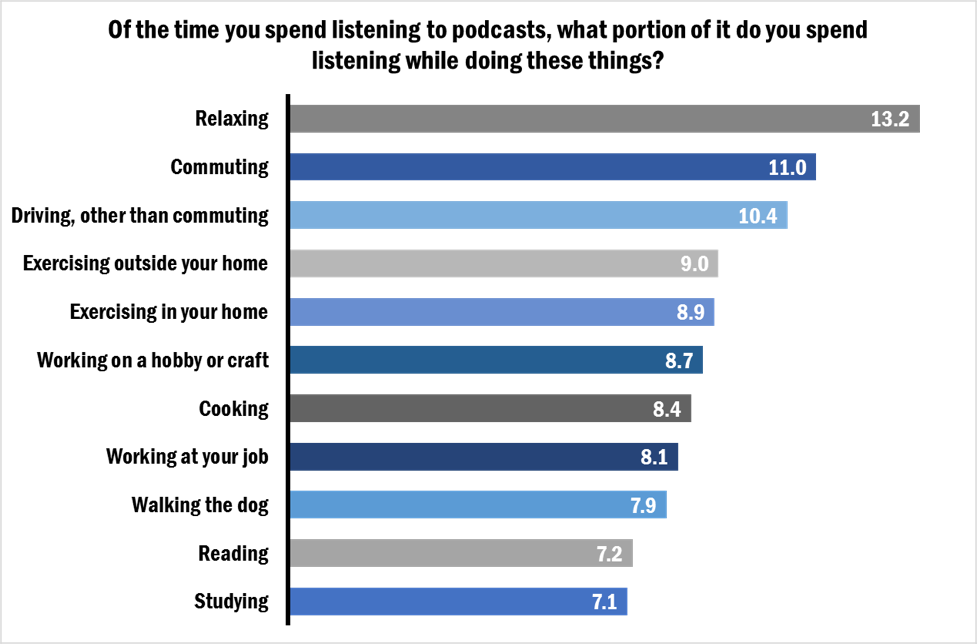 When consumers talk about using podcasting (or “audio-on-demand” for a few), they still tend to speak of it as “radio.” As they get to know and enjoy these audio-on-demand options, it’s important for the broadcast radio brands they’re familiar with to be a part of this new experience.

It’s a new world for broadcasters – one where listeners always hear the show from the beginning (and most listen to the entire show). Moreover, it’s a new world where most listeners pay more attention to the commercials (and where the right advertisers will pay big dollars for those ears).

Public radio has staked out an impressive position at the podcast table – and some commercial broadcasters are following suit (largely attached to high-profile morning shows). It’s clear that this can be a growth opportunity for broadcast radio. All we need to do is engage.