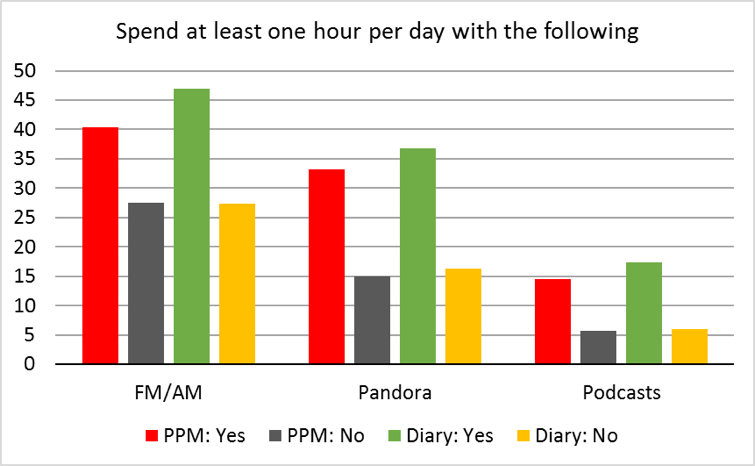 Anyone who’s been around radio programming for any length of time knows there are 168 hours in a week. Many of us reflexively know there are 126 hours in Nielsen’s “Total Week,” Monday-Sunday 6AM-Midnight. Part of the job of programmers has been to determine what’s the best content to put on the station’s transmitter during those windows.

For broadcast radio, that mostly means focusing on weekdays to grab in-car listening during the morning and afternoon commutes, the big blocks of at-work listening in the middle of the day and in-car active time on weekend days. We know that broadcast radio is losing ground at home, notably having given up valuable real estate on nightstands as clock radios are replaced by smartphones.

On-demand audio (AKA podcasts) allow access into more time with more ears in more places; places where broadcast radio no longer finds itself in favor. Nielsen is wading into the digital audio ratings business because they believe there’s money to be made there – which means they have high confidence there are a growing number of ears listening to non-broadcast content.

But, ask any podcaster about the challenges they face and you’ll learn that their number one challenge is just getting discovered. Many of the offerings clustered at the top of the weekly iTunes Podcast charts are from public radio – using their big broadcast megaphones to promote new offerings that people will listen to when they’re not near a radio.

If we truly believe in the trusted-brand status of commercial radio stations, then these brands will be able to leverage the same power that NPR has exploited to drive podcast discovery. And, if we look carefully at the consumers responsible for our fates in the ratings, it’s critical we embrace today’s opportunities today.

Our NuVoodoo Ratings Prospect Studies have shown repeatedly that the great news about likely ratings respondents, for both meters and diaries, is that they use more radio than those who wouldn’t empanel in either methodology. Since the ratings are ultimately a sales tool, this is great for business. Of course, the trouble is that these same comparatively enthusiastic audio consumers are thirsting for more options and are already spending time with online streaming audio and on-demand audio.

If we limit “radio” to being the audio that is delivered wirelessly in real time via broadcast, either AM or FM, we’re in a boat that’s slowly leaking quarter hours to the emerging options. But, if we include these new platforms in our definition of “radio” – as consumers do – we can participate in a second Golden Age of Radio. We can leverage what we know about creating compelling content, along with attracting and maintaining an audience.

What content will you explore in the radio’s new frontier?