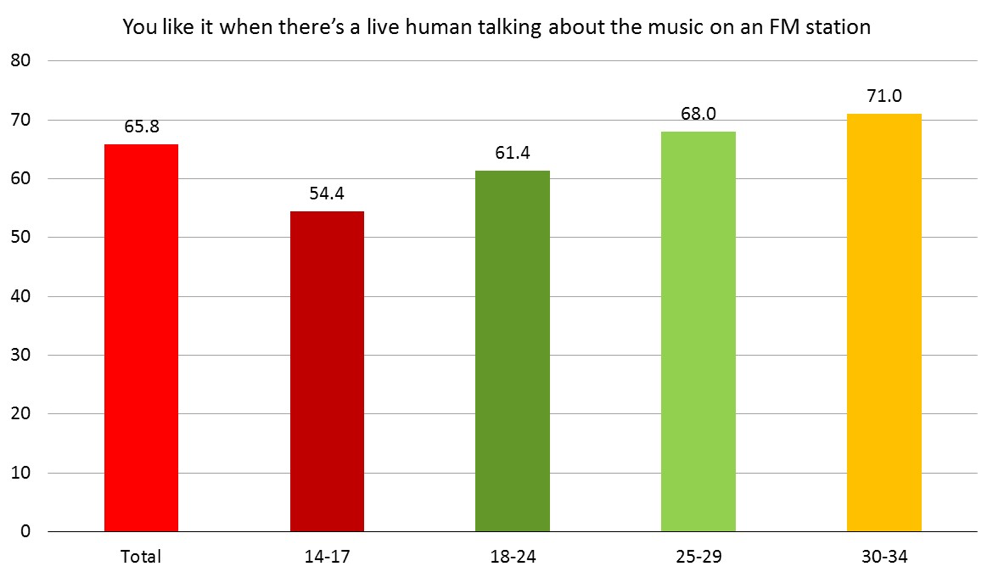 In school, you’re taught to begin consumer research with qualitative research, like focus groups. You unearth consumer perceptions that might be lurking out there among lots of people. Then, you develop a quantitative research project, with a larger, scalable sample, to determine what the actual percentages of people are who share those opinions.

Last week at the Country Radio Seminar in Nashville, NuVoodoo flipped the script and showed data from a quantitative study conducted among Country music fans, ages 14-34. After showing a 20-slide deck of results from that study (which is being posted with the wrap-up materials at the CRS website), we took the unusual route of following up with qualitative research – a live focus group with Country music fans, ages 18-29. No mirror facility. No video. No editing. Seven brave women, all fans of Country Music, ages 18-29, taking the stage in front of an audience of radio and music professionals.

We wanted to see if their answers would support the statistics we’d shown – could we give faces and a voice to the numbers? Some deep insights followed. The most memorable moment, however, was in response to the question, “Do you have a radio in your home?” One respondent quickly answered, “There’s one at my mom’s house.” Ouch. While a couple of the seven do have radios at home, none talked about time listening to them.

None admitted to knowing what HD radio is or having one. When a radio professional in the audience tried to explain HD radio, the respondents looked glazed and confused. Asked how they would change the radio station they listen to most, if they were allowed to do anything they wanted, all responded (nearly in unison) to slash the number of commercials.

Asked which Country Music artist they’d most like to meet, answers ranged from Reba to Taylor Swift – but Swift was the newest artist. Even in the home of Country Music, none of our respondents mentioned anyone close to emerging-artist status. Their interest in new Country songs, in general, is mild – favorite songs were a much higher priority than the newest songs.

When we asked about radio personalities, only Bobby Bones’ name came to mind – and several mentioned Bobby’s show one they listen to regularly. Asked by an audience member how long morning show “bits” should be, the respondents seemed to agree that 2-5 minutes seemed reasonable. But, when pressed about how much time they’ve ever thought about how radio stations should be set up to be ideal for them, all admitted they’ve never thought about it, ever.

Resonating nicely with our quantitative finding that a strong majority like it when there’s a live human talking about the music on an FM station, many of the seven qualitative respondents said they liked it when they used to see stations broadcasting live from locations around town – and added that they don’t see that happening these days.

We’re all for the idea of more station remotes – when they’re done right. A moment to get up close with listeners. A chance to capture sharable video moments for the station’s Social Media stream. An opportunity to insert a radio station into the conversations of consumers. A way to deliver some fun; to be a part of the community; to do something that Pandora, Spotify, Apple Music can’t parry. And what would be wrong with that?