How Many Fewer Commercials Make a Difference?

Broadcast radio has long been fighting listener concerns about too many commercials. Over the past few decades, chasing the opportunity to program some types of stations primarily as music distribution services, commercial load has even been part of the positioning at times. While programmers may not be able to unilaterally reduce spotload, they can often redistribute inventory to have a promotable advantage at strategically-desirable times of day.

In NuVoodoo Ratings Prospect Study IX with 5,686 respondents, ages 14-54 across all PPM markets, we looked six different ways to repackage commercial inventory. We wanted to which, if any, had the deepest impact among likely ratings participants. 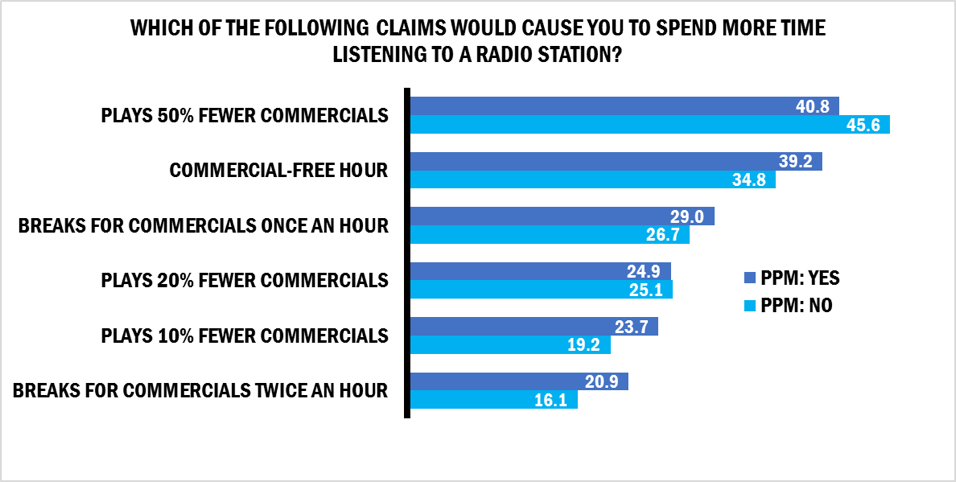 The results are similar, but not identical among likely Diary keepers. Commercial-free hour ranks number one, followed closely by a claim of playing 50% fewer commercials. In either ratings methodology, any promotable reduction in inventory gets attention – even the likely-in-place practice of breaking twice an hour. The only reason not to promote that your station stops twice an hour is that every competitor can parry the claim.

Again, likely ratings participants are more attuned to our messaging and more likely to react than the general population. It’s up to savvy programmers and managers to tackle this long-standing complaint with positive action.