What a Week: PPM Wearables and CRS 360

Nielsen officially introduced their new PPM wearables last week (to augment/replace the pager-style PPM 360 meters). Panelists will soon have the option to wear the new Nielsen meter configured as a: 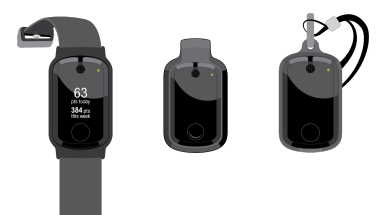 I had two big takeaways from Nielsen’s webinar: (1) while placements more efficient for Nielsen with the modernized devices, that won’t result in bigger samples and (2) while the new devices have longer Carry Time, AQH among males declines slightly – impacting rock/alternative and news/talk/sports listening.

At NuVoodoo we believe in the power of the pack, so our team will be comparing notes about PPM wearables in a video that we’ll release next week. In addition to myself, you’ll hear from our fearless leader, Carolyn Gilbert, our other long-time radio pros, Mike O’Connor and PJ Kling, as well as our newest research teammate, Jeri Fields.

We introduced Jeri at the Country Radio Seminar in February and her time was in demand right away. Jeri’s long experience working with consumer brands gives her a different perspective on what’s going on with radio. The challenges of new competitors and changes in distribution aren’t unique to radio. And it turns out that the concept of using wearables to record consumer activity in isn’t unique to radio research.

Speaking of Country Radio Seminar, Carolyn and I had the pleasure of presenting a follow-up webinar as part of the CRS 360 series last week. Teamed with iHeartRadio EVP Maynard and moderated by Clay Hunnicutt, we presented the results of a short questionnaire that CRS brought to us at the end of 2021. A recording of the session lives at countryradioseminar.com/crs360 in case you missed it.

CRS referred to the questionnaire as “eye-opener questions” – and there certainly are some that would get your attention. They dealt with how Country radio listeners might react if a Country radio station did eleven different things, ranging from regularly playing the national anthem to promoting church fundraisers to supporting the Black Lives Matter movement.

With potentially polarizing ideas in the mix, we knew that we’d have to look at the ideological alignment of listeners, as well as their age. It was a gift that the study sample included parts of four generations, ranging from part of Gen Z (14-25’s in the sample) up to the younger Baby Boomers (58-64’s in the sample) and all the Millennials (26-41’s) and Gen Z’s (42-57’s) in between.

Some ideas were indeed polarizing. Showing support for the Black Lives Matter movement, for example, risks losing TSL from 16% of the massive number of Millennial-age Country Radio listeners in the sample and 26% of the Gen Xers – though it gets strong support among Gen Z’s and Millennials overall.

Very nearly half the Gen Z and Millennial Country Radio listeners responded they’d listen more to a station that promoted a fundraiser for a local church. Even with the promotion attached to a church, people like the idea of community support. The idea has stronger support among younger listeners than older listeners – though few Gen X and Boomers say they’d listen less. This would be a novel-sounding idea for many younger listeners.

Imagine how potent this would be on the air, since you could give this type of support to a wide range of organizations around your community. It’s an important moment for this type of promotion and messaging. We’ve been gathering around each other less for two years. When we get together and focus on something besides our differences, we find we have a lot in common. Radio stations bringing people together to serve their community is a powerful image – and an area in which DSP’s can’t compete.

The idea of supporting equality for all Americans was deeply resonant in this moment, with a majority of the younger generations saying they’d listen more and few predicting a decline in TSL. As Carolyn Gilbert cited during our session, “Equality for all? That’s a winner – because that always includes ME!”

You can see all the data and watch the full presentation at countryradioseminar.com/crs360.